Tag Archive for: keto side effects

You are here: Home / Blogs / keto side effects 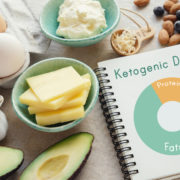 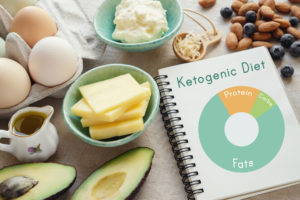 If you’re asking ‘what is a keto diet’, we feel your curiosity. It’s not exactly self-explanatory in name. And although it’s an abbreviation for ‘ketogenic diet’, that’s not too helpful in providing hints of the details either.

In this article, we’ll look at the basics of what a keto diet is and weigh its pros and cons. We’ll look at it objectively as neither proponents nor opponents of the method. By reading it, you’ll gain the information necessary for deciding whether the Ketogenic Diet method of fat loss is ideal or even suitable for you.

The keto diet is all about reducing carbohydrate intake to such rock bottom levels that the body shifts to using ‘ketones’ for energy. Ketones are chemicals made in the liver from fat. They’re triggered into production when glucose and insulin get very low. Ketones can be used as fuel by the brain, muscles, and other tissues when the body’s preferred energy source (carbohydrate) is too low.

The keto diet calls for macro-nutrient ratios of at least 70% of daily calories coming from fat along with 20% from protein. That leaves no more than 10% of calories supplied by carbohydrates. This results in low enough carb levels so as to trigger the body’s burning of fat for fuel (ketosis).

It typically takes the body about 3 to 7 days to adjust to this. Until then, adherents describe symptoms often referred to as the “keto flu” which includes fatigue, nausea, dizziness, insomnia, upset stomach, dehydration, bad breath, and difficulty concentrating.

So what is the keto diet if not without its share of controversy?

The purported benefits of this extreme diet are stabilized blood sugar, reined-in carb cravings, increased satiety, and even an eventual improved ability to focus. Some proponents even claim the keto diet can solve a range of problems like heart disease, cancer, diabetes, and autism. This idea could have merit given the diet’s call for reducing or eliminating many pro-inflammatory foods.

So, will you lose body fat by being in “ketosis?”

Most likely, you will. The initial weight loss would probably be water weight. When carbohydrates are stored in the body, they carry a lot of water with them. By suddenly slashing carb intake down to just 10% of daily calories, a few pounds of water will flush out. But over time, the remaining weight loss will likely be from body fat reduction as this eating method naturally cuts calorie intake.

How You’d Eat on a Keto Diet

If you were to adopt a keto diet, your shopping list should include lots of foods containing high quality protein and healthy fats. Think along the lines of lean grass-fed cow beef, chicken thighs/breasts, eggs, and unsweetened full-fat yogurt as good protein sources. For fat intake, think of olive oil, coconut oil, palm oil, raw almonds, and grass-fed cow butter as good sources. 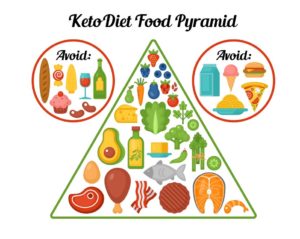 Recalling that there are four calories per gram of protein and carbs (respectively), the remaining 600 calories of energy would be split between them with protein taking the bulk.

Now you’d have just sixty calories you can fill with carbohydrates. That’s equivalent to about a single slice of rye bread.  If you could stick with such an extreme diet, you’d almost certainly reduce that 25% body fat level.

But the question becomes whether you’d be able to sustain such a stringent eating plan over the long run.

The keto diet falls under a “carbs are evil” category of eating plan for which a handful of other currently popular diets fall. These plans remain popular as they fulfill the human desire for immediate positive reinforcement. Since many people equate ‘weight loss’ with fat loss, the immediate drop in water weight spurred by low carbohydrate intake results in a quick conclusion that the diet is “working.”

Of course, fat loss can come from long term adherence to a keto diet. But the degree to which it’s due to “burning fat as fuel” as opposed to mere calorie restriction naturally arising from the measurement of macro-nutrient intake is open to debate. “Going Keto” results in a dieter becoming ‘controlled’ in their calorie intake, even if that control is a simple offshoot of measuring an extreme shift in macronutrient balance.

Whether a keto diet is right for you depends on results of your weighing its pros against its cons. In addition, it depends on your long-term goals and how long you realistically think you can nearly ban all traces of carbs from your life.

If you’re like a lot of people and don’t think that’s realistic, you’re probably better off avoiding the keto diet. Either that or have a modified, less restrictive diet planned as a fall-back after you’ve used a Keto Diet to shed fat and improve insulin sensitivity.