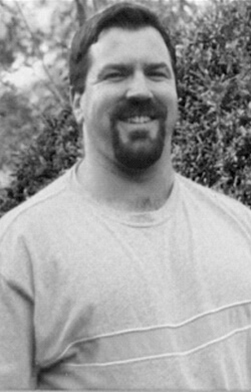 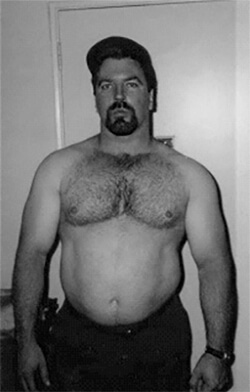 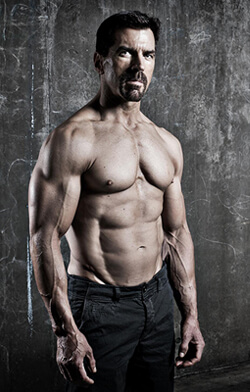 What if you held a formula to get your best body at over 40 years of age?

What if you had a unique strategy for getting stronger, leaner, and more muscular at so-called ‘middle age’ than you ever were in your youth?

And what if you could just KEEP… making that happen?

Would you tell your buddies about it? Or would you just tuck it away and keep it as your own secret formula? You know, just until you had a little head-start?

Better question: Does this sound too good to be true?

Believe me, it’s not.

My name is Scott Abbett. That’s me in the pics above. I was struggling as a young guy in the ‘before’ pic. As an older guy, I gain muscle and lose fat easily.

Would you like at least a hint as to why it’s NOT too good to be true?

Just look at all the young people inside any gym struggling to gain muscle, lose fat, get strong, and look good.

Some say there is no reason for a difference in workout methods between young and older trainees.

Maybe you’ve heard it on YouTube or seen it in an article… something like “The same workout routines that work for young people are what work for middle-aged people.”

Which one is true?

Here’s an even better question…

Who said young people are training in a way that “WORKS?”

Let’s not talk here about simple fat loss. That happens with ANY program that makes you eat fewer calories than you’re burning.

… That’s simple; there’s no trick to that. It just takes discipline.

Let’s talk about your muscle strength, size, and shape. THAT… is the stuff that puts contour on your body. That’s what gives you youthful shape.

That’s what boosts your metabolism so fat-burning is easier.

And THAT… is what you’ll lose as you age if you don’t prevent it.

‘Sarcopenia’ (age related muscle loss) is what creates a ‘pear shape’ to a body that was once youthfully athletic.

Increased body fat is partly to blame for that appearance. Lost muscle size is the other reason.

So with that in mind, let’s go back to our question: Who said young people are training in a way that ‘works’ for building muscle?

Take a look inside a lot of gyms. You’ll generally see two groups of people…

How do you know who the steroid users are?

Just look for the guys with acne-covered shoulders and over-sized delts and traps. It’s the guys (and gals) who gain ten pounds of solid weight in a couple months.

But there’s a price to pay for that. When those people stop using drugs, they’ll lose much of their muscle.

… And the men using steroids run the risk of permanently damaging their testosterone production.

If you don’t want that, then you might find yourself in the first group… the natural people struggling to gain muscle.

Even the ‘20-somethings’ get frustrated. If they didn’t, steroid use would likely not be so common.

So if young people have trouble gaining muscle, where does that put YOU and ME, a couple of guys over 40?

You know it… in a world of time-wasting struggle if we don’t do something VERY differently.

Why do ‘Muscle Building’ Programs “Work” so badly?

Have you ever noticed that EVERY workout program is 8 to 12 weeks long?

Is that a coincidence?

Probably not. There’s an animal study showing that after a series of frequent (weekly) workouts, the mechanism of muscle repair STOPS… dead in its tracks.

If you work each muscle twice a week, your progress halts even sooner, possibly after 9 weeks.

During that period, almost ANY workout program can make you believe you’re gaining muscle. The tightness and soreness you feel in your muscles provides that belief and satisfaction.

This is why anyone deeming themselves an “expert” can sell a different way of training and it “works” for a short time.

They’ll just make sure to create it as a 12-week program.

They slap pseudo-scientific jargon on it… like “muscle confusion”, and they have us thinking we’re getting somewhere.

But if we were, those ‘programs’ would have lasting effect; they’d be perennial best sellers.

But they never are. Why not?

… Because after 12 weeks is up, we’re finished. We’ve got our tiny bit of muscle tightness (“growth”). We’ve got our starved-out gaunt appearance from strict dieting…

… And we’ve often got NO instruction on where to go next.

The programs usually just tell you to ‘lather, rinse, repeat’… “Do the regimen again for another 12 weeks.”

By that time, it’s too late to get your money back.

If you’re like I am, you’ve been through too much in life to put up with that stuff. It’s misleading, and we’ve seen it too many times.

How much do Bad Training Routines Cost YOU… the Over-40 Man Wanting to Regain Your Youthful Shape?

What do programs made for 20-somethings (and not really working for them) cost YOU in time, effort, emotion, and money?

Some have you cut calories severely. They do this because fat loss is a quick win that makes you believe right away the program “works.”

They might even have you cut daily calories below 1,500. That’s lady-like eating. It will have a typical man feeling very low on energy.

They often throw in some weekly cardio and a couple of ‘muscle-training’ workouts. This makes your muscles feel sore and tight.

… It also puts you in even MORE of a calorie deficit.

This whole situation makes it even harder to gain muscle.

What “situation” are we talking about?

Remember the animal study we cited earlier? Protein synthesis (muscle repair) comes to a screeching halt from a series of frequent workouts.

So rather than fighting sarcopenia (age related muscle loss)… we can actually start contributing to it.

… And that doesn’t even cover how badly your metabolism can get screwed up. By semi-starving your body for weeks, you cause it to WANT to store fat for survival.

Since it’s hard to stay on such low calorie diet forever, the body fat comes back on even faster when the program ends.

This can spell disaster. More body fat and less muscle. After spending time, money, and effort to combat it?

There’s a Remedy to All this. Let’s call it ‘Muscle Clarity’

What do we mean by ‘muscle clarity?’

It means knowing EXACTLY what that ratio is… for YOUR body.

… For your specific age, genetics, and needs.

Those who struggle to gain muscle have no idea. They just work out ‘X’ days of the week and take ‘Y’ days off.

… And they expect some miracle to happen.

On a program like that, they’ll be lucky to keep what they have.

When YOU have muscle clarity, you can improve your body quickly, steadily, and predictably…

… Even as you get older and society expects you to lose muscle. You get more youthful by actually GAINING it.

If this sounds kind of fun to you… believe me, it is fun. It’s been working for me like gangbusters.

I want to help you make it work for you too.

You Might Have heard of my Past Book, ‘HardBody Success.’ I’ve discovered So Much More since that Book was published Over a Decade Ago… 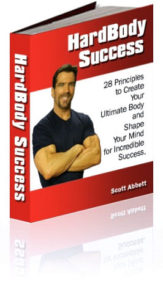 That book was simply the foundation. It was the “skeleton” of what would become a whole body of incredible discoveries I never expected.

“Thanks for the best workout information I have ever had!

I am 41 and I got great comments on my body while in Cabo over Thanksgiving! I now have my wife on your program…”

Now there’s an even MORE power-packed book for you. But some of the methods it reveals are so different from the norm that they’ll stir controversy.

They’ll likely cause every ‘trainer’ in the world to say I’m peddling bodybuilding heresy.

… Which might cause you to dismiss them before you feel and see their powerful effects.

That’s why I’d rather start by offering you my free downloadable report. It will ease you in to the whole muscle clarity concept (and all its benefits) more slowly.

When You Download this FREE Report, you’ll Get a Limited-Time Offer to Get my New Book for FREE

For a limited time, I’ll be giving my new hardcopy book away for free to my report holders. But that 230-page book has a lot of cutting-edge, unorthodox information.

Like I said, I want you to eeeease into this information.

The FREE Book offer will ONLY be for those who get your hands on my FREE Report.

And start getting your stronger, leaner, and more youthful body… starting tomorrow. 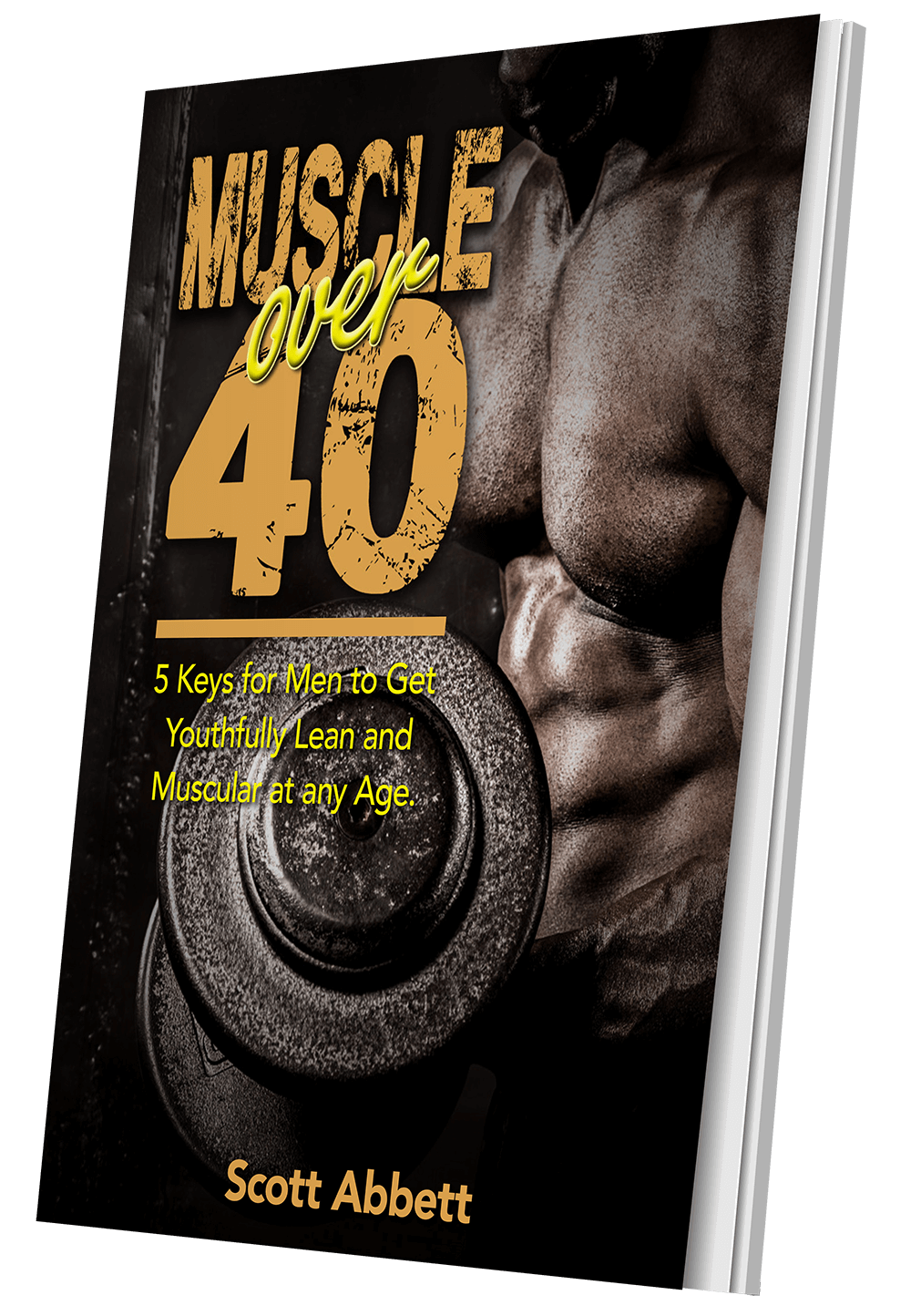 Disclaimer
Muscular development and strength grains from resistance training programs may vary among people due to factors such as genetic predisposition and individual effort in adherence to such training programs. There is no guarantee of specific results.